Before I get into this review, I want to thank Daniel from Page to Page and Sara from The Bibliophagist for their generosity! I won this ARC from a big giveaway they held and I am still not over it, they are so nice and generous and wow. 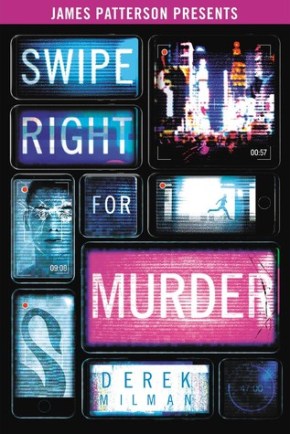 On the run from the FBI.
Targeted by a murderous cult.
Labeled a cyber-terrorist by the media.
Irritated texts from his best friend.
Eye contact with a nice-looking guy on the train.
Aidan has a lot to deal with, and he’s not quite sure which takes top priority.

Finding himself alone in a posh New York City hotel room for the night, Aidan does what any red-blooded seventeen-year-old would do—he tries to hook up with someone new. But that lapse in judgement leads to him waking up next to a dead guy, which sparks an epic case of mistaken identity that puts Aidan on the run from everyone—faceless federal agents, his eccentric family, and, naturally, a cyber-terrorist group who will stop at nothing to find him.

He soon realizes the only way to stop the chase is to deliver the object everyone wants, before he gets caught or killed. But for Aidan, the hardest part is knowing who he can trust not to betray him—including himself.

This review is spoiler free.

Content warning: kidnapping, murder, animal death, relationships between an underaged mc with various adult men, mentions of drugging, attacks by tear gas, mentions of heart problems, probably more that I am missing which I am very sorry about

I struggled this entire novel trying to figure out if my dislike of this book was just a me thing. Like, I am not into thrillers or mysteries and that is exactly what this is. However, I decided to give up on trying to guess what other people will think and just say that what my opinion is, giving that like, that’s what I am supposed to do this.

I was not a fan of this book, I was so confused the entire time and I didn’t really enjoy much about it. I would have DNFed it because I couldn’t tell you anything about what has happening and I didn’t like any of the characters, but I felt guilty DNFing an ARC so I kept on reading and now I feel like I have lowkey wasted a reading week because I had no motivation to read it but I felt guilty starting another book and it was a whole thing. Anyways, onto the review. I was going to do a list of things I liked and didn’t like but then I realized I couldn’t come up with anything I liked that didn’t have a giant “but” or “until” attached to it, so this is now just a list of things I didn’t like.

#1: How Aidan’s friends and family treated him. Aidan himself said several times that his friends treated him like a child. Maybe this is because I have experience with friends treating me like this, but this aspect really annoyed me. I mean, yeah, Aidan wasn’t the smartest by any means but he was still seventeen and didn’t need to be treated like a seven year old. Aidan’s family was also like, a mess, but the way they treated him after he came out and stuff was not cool. I also didn’t think that their rushed resolution at the end was cool either but we’ll get to that later.

#2: The fact that I couldn’t understand what was going on or the technology mentioned over half of the time. I think the reason I took so long to read this book was because nothing made sense to me. Like, what was the terrorist group doing? What was this “digital dust”? How did the FBI get away with using a 17 year old (okay this one I slightly understand but also I would like to hope this couldn’t actually happen)? I still don’t understand the majority of the plot of this book after finishing it. It is all a blurry mess.

#3: The writing. I feel like I normally don’t care about writing. Like, I get read books with some pretty bad writing and not get annoyed, but the writing in this book annoyed me. It could just be that I was already having a bad time, but I couldn’t get past the writing. There were too many sentences that were switched to all caps halfway through and it all just had the effect of making Aidan seem even more immature than he already appears.

#4: The way the ending just like, conveniently resolved after the insanity that was the entire book. The last thirty or so pages were just randomly like two months or a year after the events of the entire book and showed everything being wrapped up with a fun bow as if everything was okay and I was going ? the whole time. Like, yes, I want Aidan to get some help and for him to fix his relationship with his family, but the way it was done seemed a little unbelievable.

Okay, so, overall? I was not a fan of this book in the slightest, but I don’t think that a book about a terrorist organization recruiting a troubled seventeen year old with assistance from the FBI’s weird cyber tracking program is for me. I also couldn’t get over how bad the pedophilia was in this book and how no one seemed to have a problem with it. I wouldn’t recommend this book, but once again, I don’t read thrillers so it could just be that all the charm was lost on me but for some reason I doubt it.