Hello, friends! It is Wednesday, so I am back with another Top 5 Wednesday!! This weeks is all about celebrating father figures in honor of Sunday being father’s day (in the US)! I am actually really excited for this one, though it did send me into emo hours a few times, but we will get into that later. I was surprised as to how many favorite fictional fathers and father figures I could come up with, but I am known for growing oddly attached to the parental side characters in books, so I don’t know why I was surprised.

Top 5 Wednesdays come from a Goodreads group dedicated to creating prompts for bloggers/youtubers/other things maybe. The group is currently on hiatus for the summer, but the host encouraged people to look back upon older prompts, so I will be completely the prompts from the year before all summer (for instance, June 2019 will be using June 2018 prompts, etc).

I. Luke Garroway from The Mortal Instruments

This amazing artwork is done by Cassandra Jean! Okay, there is just, like, so much I could say about Luke. He is my second favorite character from The Mortal Instruments because, as I said, I have this habit of getting oddly attached to the parental figures. But with Luke, it is more than that? Like, he doesn’t have any biological children and he didn’t have to help raise Clary (and to some extent Simon), but he still did without a second thought. It reminds me of that old country song, He Didn’t Have To Be by Brad Paisley.

Anyways, here is a quote from City of Bones that really hits me in the feels and like, shows Luke as a great father figure:

“She could feel Luke’s worried eyes on her as she talked. It was the same way he’d looked at her when she was eleven years old and had the flu with a spiking fever. He’d brought her ice cubes to suck on and had read to her out of her favorite books, doing all the voices.”

Feelings. I have Feelings.

This amazing artwork is once again done by Cassandra Jean! Okay, just like Luke, I could go on and on and on about Alec for like, ten years. I have a lot of Feelings concerning Alec Lightwood and his children. Like, a Lot of them. Especially after those short stories last week, oh boy. I have decided I cannot actually form proper words as to why Alec is such an amazing father, so I am just going to share these quotes from The Land I Lost:

“When Max was tiny, Alec used to marvel at how neatly his little body fit into the crook of Alec’s arm. He’d scarcely been able to imagine Max getting bigger. Alec needn’t have worried. Whatever size his kid was, he was always a perfect fit for Alec to hold.”

I mean, how precious is that? So precious. The most precious.

“Alec carried the child with the ease of long habit. One hand remained free to grab a weapon, and he walked easily through the streets with the small precious weight.”

I could keep going, but this is not supposed to be an Alec Lightwood appreciation post, so I am going to force myself to move on. 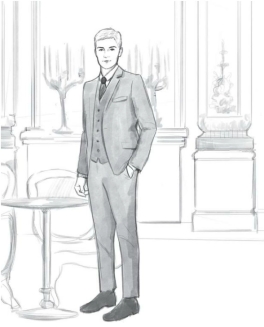 III. Maxon Schreave from The Selection

This artwork comes from Happily Ever After! I don’t make it a secret that I am trash for The Selection, so I feel like it shouldn’t come as a surprise that I also have emo hours thinking about Maxon and his kids. They don’t happen that often, but they do occur on occasion. It is just amazing to think about how Maxon didn’t have a good father figure in his life but he turned out to be such a great dad who loves his kids so much, like wow, he really did that, you know?

Also seeing America and Maxon as parents is like, my favorite part of the last two books. Just putting that out there. 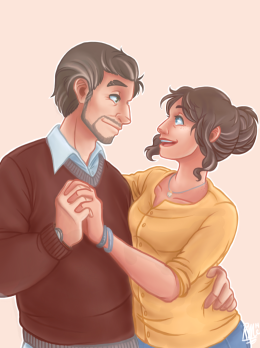 This artwork comes from lazyperfs on tumblr! Okay, I feel like Paul is very similar to Luke in my mind which seems weird, but I will explain. They both did what they didn’t have to do, Luke didn’t have to help raise Clary, and Paul didn’t have to care so deeply about the kind of odd fifteen year old son of his new girlfriend, but he did. He cared about his dyslexia and ADHD and tried to make sure that Percy knew he could get help and that people did want to help him. He also decided to believe Percy about who is was, which, let’s be honest, couldn’t have been easy for the man to do. Paul also encouraged Percy to do what he had to do, it was great. Anyways, we stan Paul Blofis in this house.

Okay, I feel like my blog this week is actually just turning into a discussion forum for how I love Charlie Swan, but I am pretty okay with that. Charlie is my favorite character from Twilight, mainly because I feel like he is the only reasonable one and also that everyone should have just listened to Charlie and a lot of things could have been avoided in the long run, but he is also a really great dad. He cares about Bella a lot, and he tries to do everything he can to understand her and help her, even though she often didn’t make it easy for him. He was also an amazing granddad, so I feel like he should get double points if like, this whole being a great dad thing is something that you get points for.

Also, the man likes baseball. I like baseball. More points to him.

Alright, that is my list of five of my favorite fictional fathers or father figures!! I have way more I could and honestly would love to talk about, which kind of surprises me but I will take it I guess. What about you guys, who are your favorite fictional dads? Do we have any in common? Let’s chat in the comments!