Hello, my friends. Today we’re talking all about Emily Windsnap so I can try and get this series out of my system and talk about something else. I thought about doing a full series review, but then decided that for these books it would probably just be easier to write a paragraph or so on each book, especially since these are not exactly books that you have to diligently read in order (though I did).

Anyways, on to the actual reviews.

Book One: The Tail of Emily Windsnap

As I was reading this book, I felt instantly transported back to childhood and reading this book in the car on the way back from the beach. Nostalgic memories aside, this book was a great introduction to the series! The world of mermaids was introduced in an interesting way, and we got to see Emily fumble through this new society that she had never known about as a means of discovering what is what. There was also lots of great mystery and adventure that I know that I really fell in love with as a kid. All in all, I would recommend this to kids and adults alike because you’re never too old for a good middle grade.

Book Two: Emily Windsnap and the Monster from the Deep

This book took a completely different turn. We went from cute, middle school girl accidentally discovers she is a mermaid in gym class and then goes on an adventure to cute, middle school girl almost gets everyone killed by a ancient, angry monster. However, it was a very interesting change. I really enjoyed seeing how Emily was adapting to all of these very sudden and dramatic changes in her life as well as how she handled these new crises. This also had all of those typical “friendship is important” themes common in middle grade that nevertheless make my heart happy.

Book Three: Emily Windsnap and the Castle in the Mist

Is this my favorite in the series? Its probably my favorite in the series. I was just saying how book two amped things up, but this one brought it to an entirely different level. Emily has just been getting used to her life when Neptune threatens to change it yet again and cut her off from one half of her life forever. The adventure and mystery in this one was some of the best out of the series, it also introduced some great new characters (hello Aaron, one day I will not think of my grandfather whenever I read your name. One day) and a new theme that we will follow through the rest of the books.

I didn’t like the majority of this one as much for some reason, I guess it was something to do with the mystery aspect. I just didn’t find it as interesting as the others, though I am not apart of the target audience so that may have played a big role. I did like all of the background themes and character development of this one a lot though, which is what kept this one at a 4 star rating. Seeing the Windsnap family + friends try and do their best to unite two very different groups at a time where tensions were already way too high was very interesting.

Book Five: Emily Windsnap and the Land of the Midnight Sun 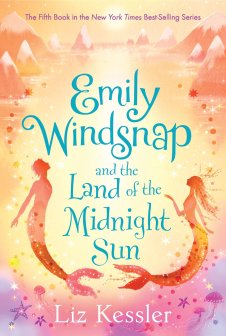 “And have you got any provisions?”

“I’ve got a couple of rolls and some fruit from the lunch buffet.” Aaron said.

Okay, I just felt the need to share that quote because that is actually me heading to class everyday.

This book was like, a lot. There were so many twists and turns that kept taking me off guard it honestly blew my mind. The stakes were even higher than they were in book three, which honestly came as a shock to me because book three was really intense. All in all I just really enjoyed this one. Also the concept of “shell phones” kind of made my day.

Book Six: Emily Windsnap and the Ship of Lost Souls

Don’t you just hate it when your week long school field trip about studying the geology of an island turns into a race against time to save an entire ship and their crew from dying in Atlantis? Emily Windsnap sure does.

I really enjoyed this one, I enjoyed getting to know Lyle and seeing Emily journey to and from the mysterious city of Atlantis. The mystery of the disappearing ship that only Emily and Aaron could see was very interesting and well thought out. The discussion towards the end about not being able to chose between your child and your spouse was a lot for a middle grade, but also very well handled.

Book Seven: Emily Windsnap and the Falls of Forgotten Island

I would just like to say that when I reread the dedication about how Kessler wrote this book in the wake of the Manchester bombing, I cried. Reading her page about how she wants to continue to give children stories about uniting two worlds that seem unable to unite hit me really hard and really shows me how I need to read more middle grade because they are in now way less important than other books just because they are aimed at younger audiences.

The book itself was also amazing, this time featuring ancient prophecies and a grieving old man who lives on top of a mountain. I know I said that book three is my favorite, but I am honestly debating between the two now. The themes within this one were just so good and so important. All of the talk of unity, from the groups on the island to Shona and Emily, was very on point and I can really see how it would resonate with kids even more.

I recieved an eARC of this book from the publisher via Netgalley in exchange for an honest review.

Trust me when I say that I was very disappointed that I didn’t really enjoy this one much. It still had the adventure and mystery aspect, but both of those things felt very rushed. There was also some discussion concerning two of the girls on the pirate ship “not being like the other girls” which irked me a little bit, though that was helped a little when that narrative switched to one about finding your own place with the right people. There were also just a lot of convenient plot elements in this one more than the others that went under explained.

All in all it was still a fun, quick read and I would still recommend it. It would also probably go over a lot better with the intended audience that doesn’t typically read as critically.

I really love this series a lot!! It has been super fun spending the last month or so flying through these books and I don’t know what I’m going to do now that I have finished them all. They have great themes of unity and friendship and honestly hold great discussions and teach great lessons. If you or anyone you know is into mermaids, tell them to consider checking them out.